Broken scripts/ No longer being support or updated scripts. 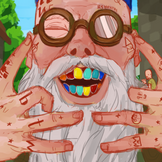